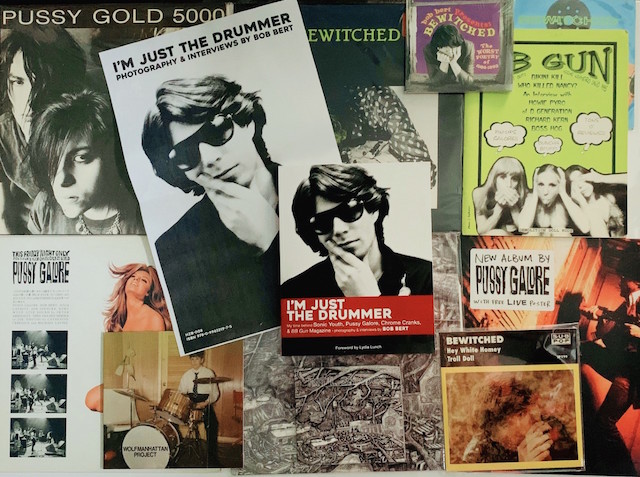 “Hozac Books is proud to present our third art book, I’m Just The Drummer: the Bob Bert artist compendium of photography and interviews, establishing his irreplaceable link between the 1970s No Wave movement and contemporary noise rock. Although Bert’s immediate work is best known drumming in his wide array of musical projects he’s been involved with (such as SONIC YOUTH, PUSSY GALORE, CHROME CRANKS, LYDIA LUNCH, and many more) since the early 1980s, the focus of his book isn’t drum-centric as it is an encapsulation of the artistic world he’s developed within. It’s not a drumming instructional guide, or a critical assessment of how the drummers in bands are treated, but a 200+ page guide through Bob’s musically adventurous life, and what a ride! Starting out with his teenage love of photography and his process of capturing the underground downtown figureheads as well as the emerging unknown No Wave bands, Bob was just as much of an enthusiastic fan of music as he was a fixture in some of the most crucial music of the 1980s, 90s, and beyond. And that’s what’s really important in the long run, as his excitement for music bursts from each page, providing the springboard to his long-running life in bands on the fringe of the mainstream.

But Bob Bert wasn’t just that figure of intersectional commonality of SEVERAL pivotal bands with an edge over the last 30 years, oh no. He also has (not surprisingly) impeccable taste in music and culture, which could only sprout forth in the 1990s with an inevitable ‘zine,’ and thus, BB Gun Magazine was born. Spanning from 1995 until 2004, and covering emerging underground music, film, and outre artists sub-underground, as well as Hollywood-level impresarios, I’m Just the Drummer contains a wealth of interview excerpts from the elusive original magazines, along with his photography accompaniment.”

This entry was posted in Jon Spencer, Press, Pussy Galore. Bookmark the permalink.