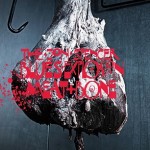 The Australian edition of Meat and Bone by The Jon Spencer Blues Explosion is released by Freeform Patterns on 21 September 2012. This edition of the album includes the bonus tracks Gadzooks! and James Brown and the Famous Flames cover Tell Me That You Love Me originally released as In The Red Records Jukebox Series single #6.

Visit ‘The Title Store’ blog for a short interview with Jon Spencer:

“Most Australian rock ‘n’ roll fans remember your performance on Recovery, a Saturday morning tv show for teenagers. What did you think? I’d better teach these kids a lesson?
I can’t really remember what I thought. Probably only that we needed to hit it hard and do a good job. The “freak out” certainly was not planned. Just exciting music and the moment. I do remember being excited to meet Tony Cohen. He was the producer of The Birthday Party’s album Junkyard and was mixing the audio for the TV show that morning.” – Title Store