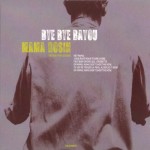 Congratulations to Mama Rosin who have just won the title of Best Alt. Country Album at The Independent Music Awards for Bye Bye Bayou (recorded at NY Hed with Matt Verta-Ray and Jon Spencer).

The album was originally released by Moi J’Connais Records on vinyl and CD with the expanded ‘Directors Cut’ edition being released in Canada on 4 June 2013.