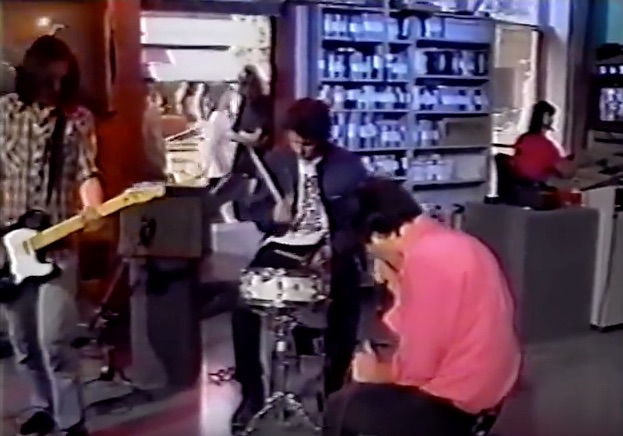 The Jon Spencer Blues Explosion show at The Wedge, Much Music, Toronto, Ontario, Canada on 24 August 1995.

The presenter is Sook-Yin Lee who was filming with Jon Spencer and Russell Simins around Polson Street and whilst being interviewed on top of the van at the docks at exactly 12.32am they witnessed a fireball over Toronto and the resulting footage appeared on the news.

This footage of this live performance and the fireball appeared on the Live Promo Video (VIDEO, US)and is mentioned in the article Vice: I Cannot Play The Blues: The Rock ‘n’ Roll Fireball Jon Spencer.

“The summer of 1995 was hot for us Ontarians – so hot, in fact, that one night in July the sky boiled. I remember thinking, “you know, green is an awfully funny colour for the sky,” when the gigantic ball of fire screamed its way south, directly over my head. It turned out to be a meteor; it landed close to Buffalo, or maybe in Buffalo, or on Buffalo. At any rate, I was shocked. I phoned the police and asked them about the giant ball of fire. The police didn’t know anything. I asked my family. They were also mute. I asked friends and neighbours, in whose regard I slipped a notch or two I’m afraid. Nobody knew anything, and I began to question my sanity.

I’d all but forgotten about the giant ball of fire when, absent-mindedly flipping to Much Music, I saw Jon Spencer Blues Explosion interview with Sook-Yin Lee. Jon Spencer, Russell Simins and Judah Bauer were seated outside, speaking with Lee, when that very same giant ball of fire flew over their heads. The ball of fire finished the interview. I was pleased to be redeemed, but also kind of awe-struck by the cosmic powers of the Blues Explosion. Where else can you find a band to bring down the heavens?” – Jon Durbin (Vice magazine, November 1998)