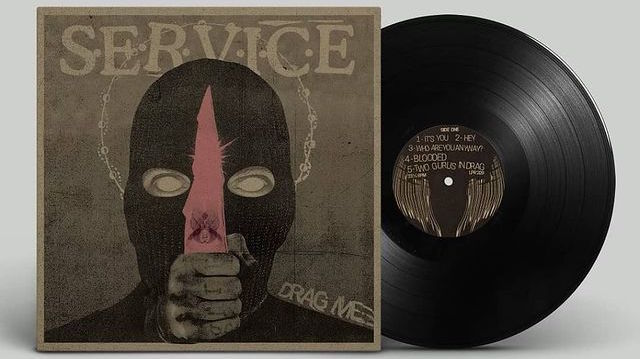 SERVICE is an urgent, howling, earnest rock and roll band, steadily cementing their reputation as a great live act, ahead of releasing their debut record, Drag Me (Let’s Pretend). Started in the Manhattan apartment of renowned drummer Russell Simins, SERVICE now lives in Indianapolis, home of the other two core members, Jilly Weiss and Mitch Geisinger. The band sums up their sound with the quip, “post-punk then punk again,” which reflects their smart, self-deprecating lyrics as much as the music.

Jilly is an iconic front person with the boastful confidence of Nick Cave or Mark E. Smith (the Fall), combined with the sort of confessional sincerity of PJ Harvey. Mitch’s wild guitar manipulations recount the Birthday Party and Butthole Surfers with an array of effects the Liars would admire. At the helm from behind the kit is Russell Simins, best known best for his tenure in NYC staple rock outfit, the Jon Spencer Blues Explosion. Simins’s uniquely hard-driving, powerful beats give SERVICE a huge sound. Glide Magazine called the band, “the most authentic expression of vulnerability and self-awareness, with wildly impactful vocals set against roaring guitars and a giant beat.” They are ready to play bigger rooms.

SERVICE will release their debut album Drag Me, on Let’s Pretend Records on May 6, 2022. This is very much a guitar record, a two-guitar assault really, but the hard-grooving beats keep it almost danceably post-punk. Drag Me is certainly unorthodox, but has choruses that will have you yelling along. Magnet Magazine called “Hey,” the first single,” a caterwauling assault of a post-punk song that will help you end your bummer summer on a high note.” Drag Me is an audacious, swaggering rock and roll record that is about to put SERVICE on the map.