The tracks from this performance were release on the ‘Recovery’ 20th Anniversary Box Set in 2016.

A clip of this performance was used in the video for The Robert Kennedy Assassination – Resist!

Illustration of this performance by ‘tsuujiiiiii’ posted below.

JON SPENCER BLUES EXPLOSI ON RECOVERY 7th Sep 1997 – ABC.
The Jon Spencer Blues-Explosion hi-jacked the ABC’s Recovery Studio on
Saturday morning. It was. one of the greatest moments ever seen and a
display which can only take place when television is completely live.
The Blues Explosion’s eloquent demonstration of their chaotically
intense style shook the ABC’s foundations. They channelled all the
energy and intensity of their live show into their
Recovery performances, firstly of the stomping. raunchy and
hysterically sexed-up ‘Wail’, and then returning to do the perfect
power-funk single. ‘Two Kinds of Love’, which mutated into ‘Flavour’,
consequently fucking with the minds of everyone present. The audience
of teenagers, already high from an earlier sugar rush provided by
Recovery staff, were driven into fits of ecstasy as they witnessed
rock and roll mayhem first hand. l would even be prepared to bet that
Recovery host Dylan pissed his pants when Jon Spencer left the Blues
Explosion set and ran straight at him screaming what other than, ‘The
Blues is No.1!’ Judah Bauer and Russell Simins continued to play
whilst Spencer ran amuck in the studio.

Guitarist Bauer jumping up onto the drum kit and doing his
concentrated and potent rocked-up funk riffs while the steady beats
and ‘groove flavour resounded gloriously from the deceivingly simple
kit Simins bashed at. The Jon Spencer Blues Explosion known for their
bassleseness, cool and glamour played their twisted sassy sleazy funk.
A noisexy puree direct from the Devil’s Jukebox and into
our loungerooms like a 50s horror movie. No one was safe from Jon
Spencer’s rampage around the set.

The handheld cameraman had no idea what was going on as he was handed
Spencer’s guitar and was repeatedly pushed away by Spencer. His
proximity to the Therernin was potentially disruptive to the sound,
but in a wild fit Spencer conveyed this by pushing the confused
cameraman away.

Jon Spencer’s bold stunts were just starting and the anticipation was
fervent. He ran at everyone, camera operators, cameras, props, the
young and suddenly electrified audience (including the dethroned work
experience kid and the two kids given the unfortunate task of cooking
Bernard Kings undoubtedly sour recipes), he attacked that big blow-up
‘R’. the Recovery mascot, he broke three microphones. he climbed up on
the kitchen bench top and chucked stuff, hyped on an extraordinary and
infectious adrenalin rambling. ‘I Got To Do It’ and then he returned
to the Blues Explosion set and demolished what he could of that. The
wild man took a giant sailing leap over Russell Simins (who did not
miss a beat) jumping, through the air and tearing down the huge
backdrop that had announced the ‘Blues Explosion’. What could anyone
be expected to do after that but go absolutely nuts with excitement.
We fall to our knees and growl to the moon. Not one person in the ABC
studios was left unaffected. The Blues Explosion gave us a free and
crazy boost, a kick start to the day mightier than a thousand brewed
coffees. This was potent redemption against those who had not heard of
the Blues Explosion before. JSBX kick serious ass! Even at 9 in the
morning after a couple of hours sleep this dynamo of sleaze swamp funk
can stage an incredible performance, of genuine intensity and
brilliant abandon. The Jon Spencer Blues Explosion launched themselves
into the live medium they were provided with (the main condition they
agreed to perform was because it was being broadcast live). We
were all reduced to hyperventilation and possibly some discreet undie
wringing-out and some heavy breathing.

The Jon Spencer Blues Explosion are the real shit, and don’t ever
forget folks – the blues is number one! 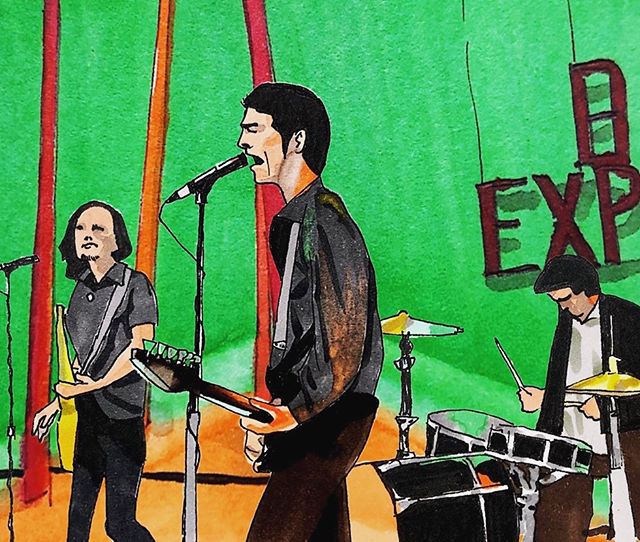