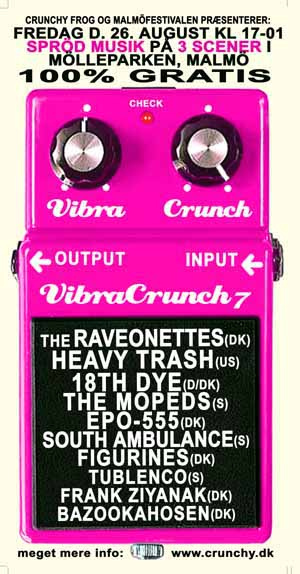 “Heavy Trash rocked y’all back to the 50s with their oldschool rock’n’roll. A nice mixture of rockabilly, surf, blues and country in the coolest rebel style.

The band was joined by Kim “kix” Jeppesen from PowerSolo on upright, surfin’ bass and Jesper “Yebo” Reginal from The Tremolo Beer Gut on stompin’ drums.

Together they made the audience explode and hungry for more. A very dynamic and awsome band.” – Crunchy Frog (https://thecrunchyfrogblog.wordpress.com/2012/03/16/from-the-archives-vibracrunch-the-7th-heaven-by-crunchy-dk-13-september-2005/)