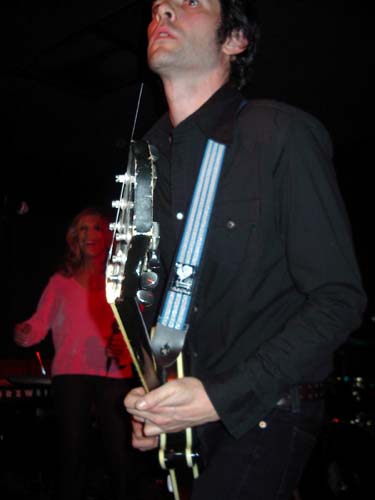 Jon Spencer played on the songs Jackson, Lightning’s Girl and These Boots Were Made for Walking.

Jon Spencer appeared on Ain’t No Easy Way from the 2004 self-titled album.

“Meet John Spencer who almost singlehandedly put New York
back on the map of blues and rock music. His band, The Blues
Explosion, started a whole new trend paving the way for a lot
of today’s biggest rock bands.

John jammed with us on Jackson, Lightning’s Girl and Boots at
Maxwell’s in Hoboken.

“And, since my ears are burning, baby (well, only one ear, since I’m deaf in the other), I might as well let it blurt. I heard that Jon Spencer surprised the crowd at Maxwell’s on Thursday when he jumped onstage with Nancy Sinatra for a few songs in her father’s hometown of Hoboken—joining her in renditions of “Jackson” and the classic “These Boots Were Made for Walking.”” – villagevoice.com

“At Nancy Sinatra’s show at Maxwell’s on Thursday, Jon Spencer joined in to kick some guitar into “Boots” and play a duet of “Jackson,” the Johnny Cash/June Carter classic, which Nancy and Lee Hazlewood also had a hit with. Eerily, it was right after the show that the heartbreaking news of June’s death came. – Mary Huhn (nypost.com)”