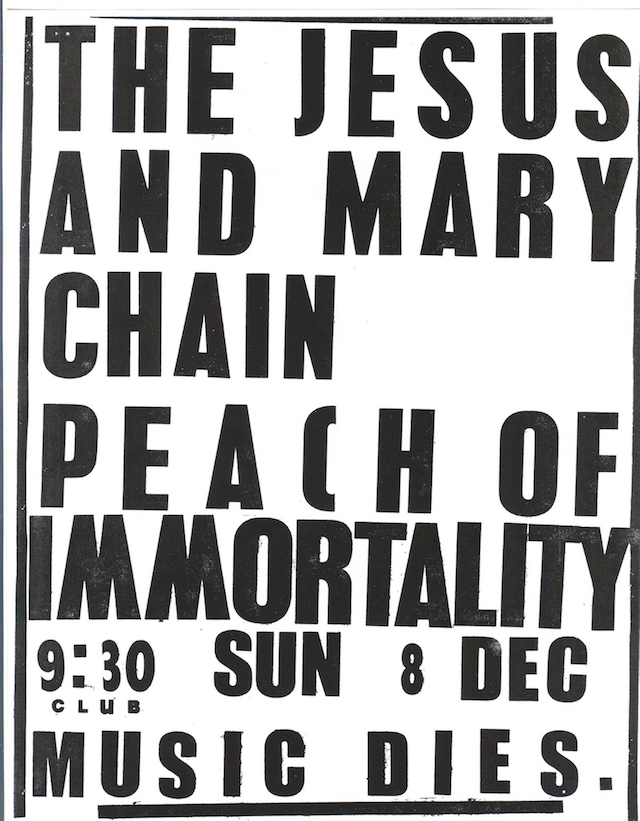 Peach of Immortality (with Julie Cafritz and Jon Spencer of Pussy Galore) show at Washington, 9:30 Club, DC, US with Jesus & Mary Chain on 8 December 1985.

UPDATE: The complete performance was released on the nine disc Peach of Immortality compilation Surrealisms.

“Despite the lack of sell-out there was a very healthy sized crowd in attendance and the Club was very full. by the time Peach took the stage, Tonight I was very entertained by what they were doing with their usual array of cello, guitars and tape decks, plus tonight they also had a guest guitarist from Pussy Galore. The Peach of Immortality was a way of taking conventional instruments and making a most unusual collage of sounds out of them. Tonight I heard pieces of more “established” rock tunes warped in the mix (Black Flag, for instance), and I think that it gave a more accessible flavor to their set. Still much of the audience came expecting to hear the pop-ish songs of J.A.M.C. and didn’t have much of an opened mind towards Peach.” – WDC Period, Vol. 1, No. 13

nb. This is the show at which Cristina Martinez and Jon Spencer met:

“A co-worker of hers, Tom Smith, had a noise band called Peach of Immortality, which had got the support slot for The Jesus & Mary Chain’s first Washington show at the 9.30 Club.

At The Corcoran, Martinez was doing a lot of still life, “but thought I should try live photography,” so she went to The Mary Chain show. That night Jon Spencer and Julie Cafritz of Pussy Galore were sitting in with Peach Of Immortality.

“After the set, I started talking to Jon backstage about ‘Nail’ by Scraping Foetus Off The Wheel,” she remembers. “I was definitely much more socially literate then he was; ‘dysfunctional’ is putting it mildly. I guess I saw past the bad vibes and felt some sort of kinship with the confusion and aggression.”

This anti-meet-cute took place on December 8, 1985 – The Feast of the Immaculate Conception – the date on which Spencer and Martinez continue to celebrate their anniversary.” – thequietus.com

“Laughing here while listening to the 9:30 performance from December 8, 1985. Those elfin twerps from Jesus and Mary Chain were so livid that they locked us out of the dressing room – as if we could have given half a shit. Really, the best intro to any show, ever – Jared slicing up his guitar case and bearing down on the strings with an electric razor, Rogelio doubling and tripling with his wah-wah cello, me manipulating Led Zep‘s “Since I’ve Been Loving You,” and Jon Spencer soloing during the breaks at several levels of fetid mania above the Reid brothers‘ capabilities. (And, unfortunately, for a minute or so, an idiot at the mixing desk bellowing into the house mic to make light of it all.) I‘m amazed we pulled it off without police interference. When we did our Mary Chain manip, holy fuck. The spittle hit the sporran!” – Tom Smith (28 December 2017)

Excerpts from reviews of the show:

“So Peach of Immortality finally come on at 10 or so. I saw these guys a
year and a half ago, and they were pretty awful. Well, they’ve gotten
worse. They are a noise/industrial band, but not nearly as interesting as
folks like Einsturzende Neubaten. These guys (Peach of I) have *no* rhythm,
just a lot of feedback guitars and a guy working a couple of tape decks. I
stood around for 10 minutes to see if maybe they’d get interesting, but they
didn’t, so I left.” – gaffa.org

“It seemed to take forever for the band to come on and I had little patience for the openers. I only remember one of them: noise band Peach of Immortality, who blew my left ear out that night. It’s never been the same.” – Mike Schulman / https://culturie.wordpress.com/2016/01/07/my-favourite-gig/ 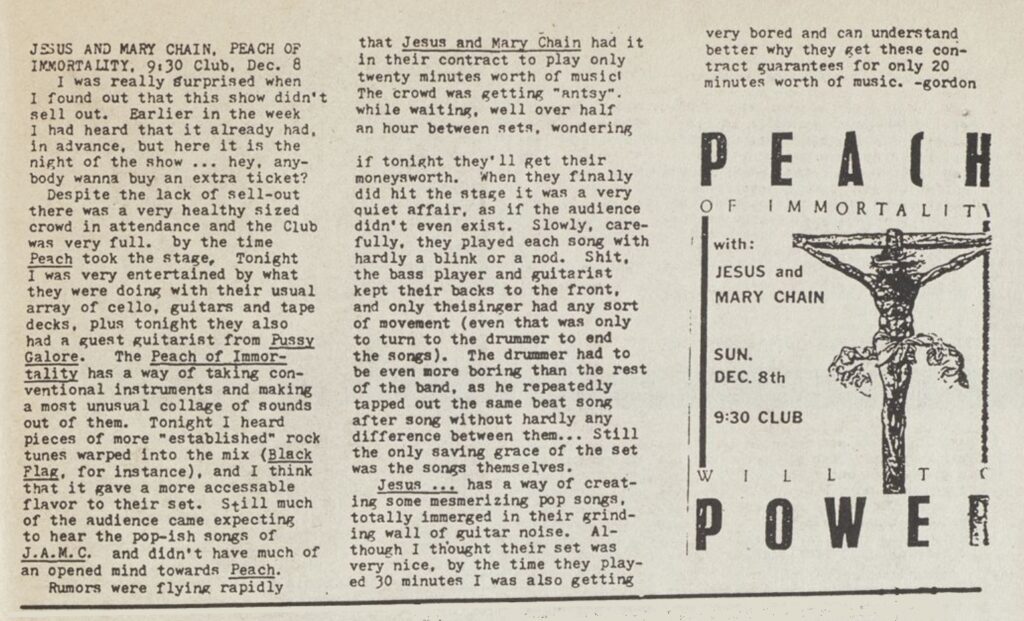 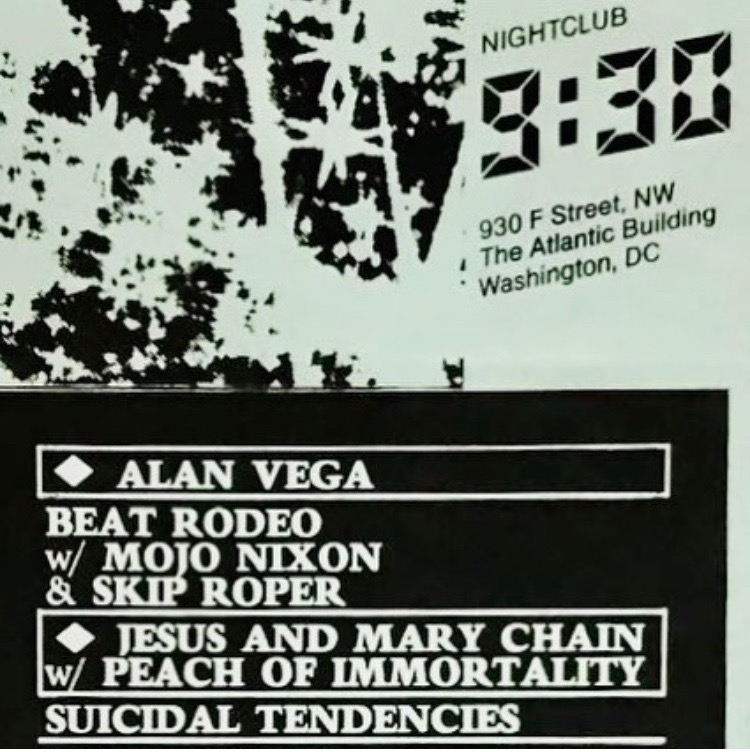 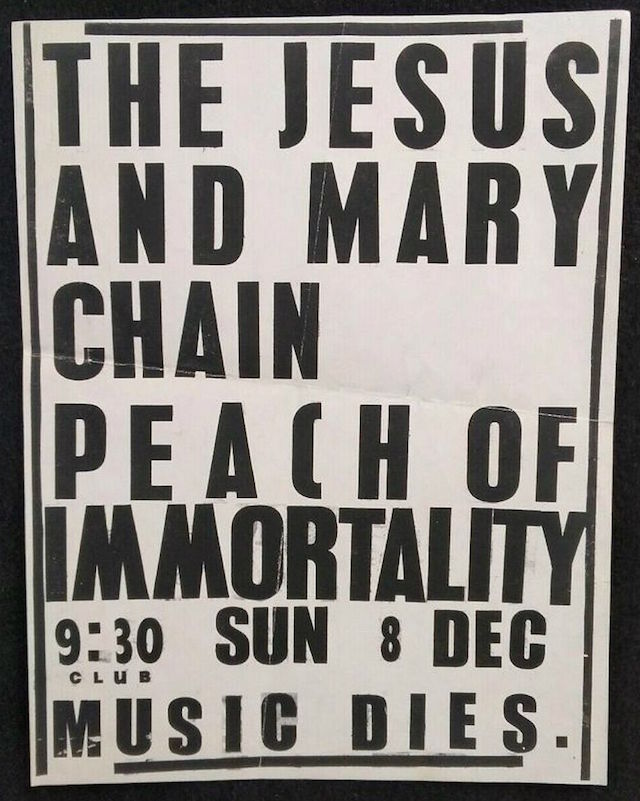