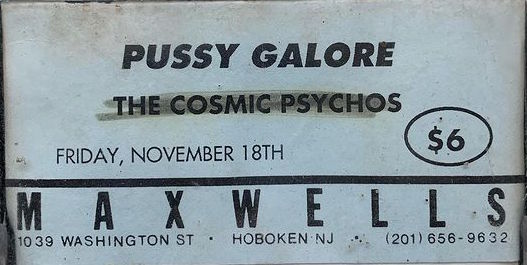 Pussy Galore show at Maxwell’s, Hoboken, NJ, US with Cosmic Psychos on 18 November 1988.

“On November 18th, 1988, Pussy Galore played at Maxwell’s! This is the second Pussy Galore show at Maxwell’s to appear in the Mckenzie Tapes archive. We posted the first one back in 2019, which was an excellent recording of the band’s performance on January 31st, 1987 in support of Los Angeles’ The Leaving Trains. Pussy Galore returned to Maxwell’s on this night more than a year and a half later for another absolutely raucous performance and their set included a ton of new songs. Following this gig, the band released their second full-length, Dial ‘M’ for Motherfucker, in April of 1989. Their set included several tracks from this record, including “Dick Johnson,” “SM57,” “Solo=Sex,” and more.

Pussy Galore was fronted by guitarist/vocalist Jon Spencer (Boss Hog, The Jon Spencer Blues Explosion), and featured Hoboken’s own Bob Bert on drums. Our friend Jack Silbert recently chatted with Bert for the Hoboken Talks interview series. You can stream the entire interview (which includes a reference to a photo taken by Dave Mckenzie) via YouTube.” – The McKenzie Tapes