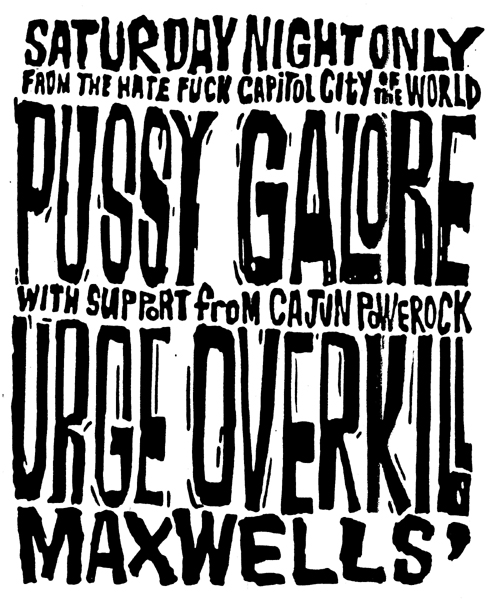 “this show was cancelled after Hoboken freaked out when I hung these flyers all around town! They were so offended that it was put on the cover of the Hudson Reporter which was put on everyone’s doorstep! I had to write a apology letter to the mayor to keep Maxwell’s from getting into trouble! Show got more publicity then if we actually played it” – Bob Bert (https://www.instagram.com/p/CSUYsuQLGNK/)

Article about the cancelled show:

“The band that’s tried harder than George Michael to get censored finally has, Pussy Galore is banned from Hoboken – for a show, at least – since postering around Maxwell’s last week. Apparently locals didn’t like their town dubbed “the hate fuck capitol city of the world” and called city hall. According to Maxwell’s owner Steve Fallon, the police fined him for obscenity and “littering”: guess they never saw a band announcement around town before. Saturday’s who was cancelled, and two plainclothes dicks ducked out of the club when I asked them about it. “People are telling me I should sell the place, I’m just sick of this,” said Fallon. Pussy Galore’s Jon Spencer said “I…aww fuck,” – R.J. Smith”