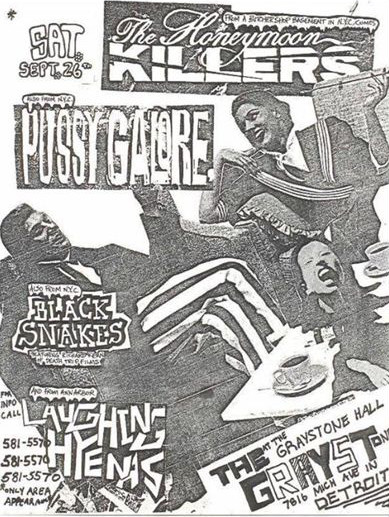 Pussy Galore show at The Graystone Hall, 7816 Michigan Avenue, Detroit, US with The Honeymoon Killers, Black Snakes and Laughing Hyenas on 26 September 1987.

“The promoters name was Scary. We slept on the dirty floor of the club in a dangerous section of town. The next morning when we were suppose to get paid, Scary pulled out a gun. As we were leaving Richard Kern of Black Snakes took a full pitcher of water and poured it over the soundboard! The good ole daze” – Bob Bert

“Pretty sure Scary ended up in prison.” – Danny Kroha

“That’s the night I learned to always put in an effort. We were so mad at the promoter because he’d spent our guarantee the night before partying, and there were, like, fifteen people in the audience because everybody in town knew to stay away from that place, I guess. So we really phoned it in and cut our usual 35-minute set to 20. But afterward, someone in the audience said, “That was great. I drove 150 miles to see this show.” And right then, I wanted to go back and do it again just for them.” – Lisa Wells

Judah Bauer, Russell Simins and Jon Spencer have all recorded and performed with Honeymoon Killers.