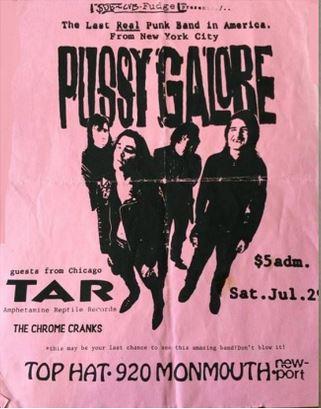 On 2 July 2020 Music_Matador posted the following story about this show:

“On this day in 1989 I saw Pussy Galore, Tar, and Chrome Cranks at Top Hat in Newport, Kentucky just across the river from Cincinnati. This was in a little dive bar and I got right up front for all three bands. One of the guys from Chrome Cranks later told me that this was their first show. Tar was a cool band from Chicago on Amphetamine Reptile records. That night PG was Jon, Bob Bert, and Neil Hagerty…Julie Cafritz wasn’t there but I’m not sure if there was a fourth member – my memory is foggy on that part.

I snagged the PG set list, a tour T-shirt, and a Jon Spencer guitar pick but those are all long gone. I also bought the Tar Handsome EP on vinyl. After the show we walked out the front door and Jon was loading equipment in the trunk of his car. Me and my friends chatted with him for a minute then took off.

There was a gas station as you’re heading out of Cincy toward Indiana called Starvin Marvin. We stopped for gas and snacks and the Tar tour van pulled up. So we chatted with them for a while and the lead singer gave me one of his metal guitar picks and signed my record: “ see you at the next Starvin Marvin!”

It was a pretty awesome night until we got into rural Indiana and were chased down country roads by some idiots swinging baseball bats and waving shotguns out the window. They tried to run us off the road several times and we finally ditched them and crept home. My friend called the police and they said we probably provoked them…nope! We were just driving home minding our own business.” – Music_Matador 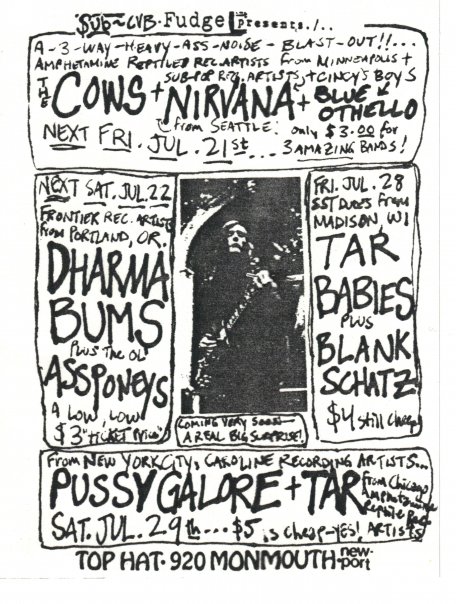