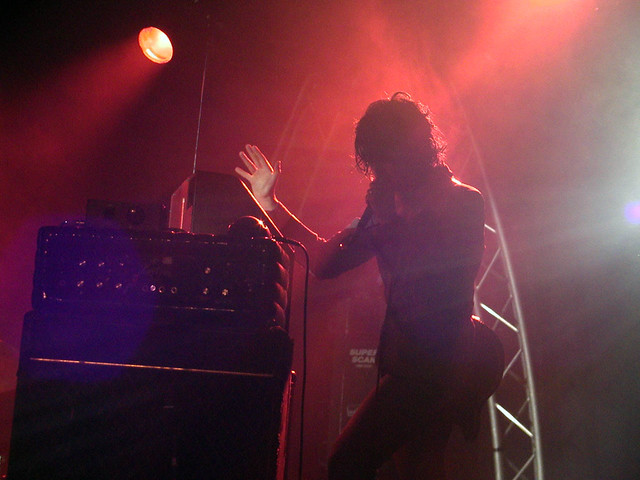 Camber Sands, All Tomorrow’s Parties festival. Not a Hives show. I should make it clear that I do like The Hives. They are a very good rock’n’roll band and so far have been friendly and nice (as have most of their crew). But today we are on our own. This will be the second time BX has played ATP. We did the very first one in ’99 when it was called Bowlie Weekender. On the drive to the site I listened to a rough mix of that show and it was really good, but it’s always strange to hear old shows. Get in at around 4pm. Yuka Honda (ex Cibo Matto) is playing with Sean Lennon and it’s nice to see her again. I pass Lydia Lunch, one of my NYC heroes, on the chalet steps. The festival is held at an old holiday camp and the bands are given “chalets”, aka motel rooms, to stay in. She says hi. She is playing right before us/overlapping us on another stage so I catch a bit of her set but then I gotta get ready to do my thing. It feels very nice to have our own show, not be bound to 40 minutes, and to have the crowd with us. We play very well. Afterwards I meet up with my friend Toby who just shot a video for the Heavy Trash record I just did with Matt Verta-Ray. Also met with Barry, one of the ATP promoters, to discuss some super-secret future plans.

I should note that I have not been drinking on the tour so far. Well, not really. It is a long trip and The Hives shows are short and over with so early, so it does take some doing not to drink. But so far I have been doing a good job of it. Except for tonight. I give myself permission to get loaded. Which is exactly what I do. Hang out with Toby, watching Peaches, meeting strange people etc. Peaches is very good and has exactly what The Hives are missing: Sex and Menace. Afterwards I congratulate her on her set, especially the songs in which she plays gtr. She says that Julia Cafritz, from Pussy Galore, was a big inspiration! The evening starts to drag on. I meet Mr. Vincent Gallo, the current ATP curator. He is small, kinda elf-like, but very nice. Seems nervous. I thank him for the invitation and then beat it. The next day is rough. I am very hungover. – Jon Spencer (Stool Pigeon, 2005), 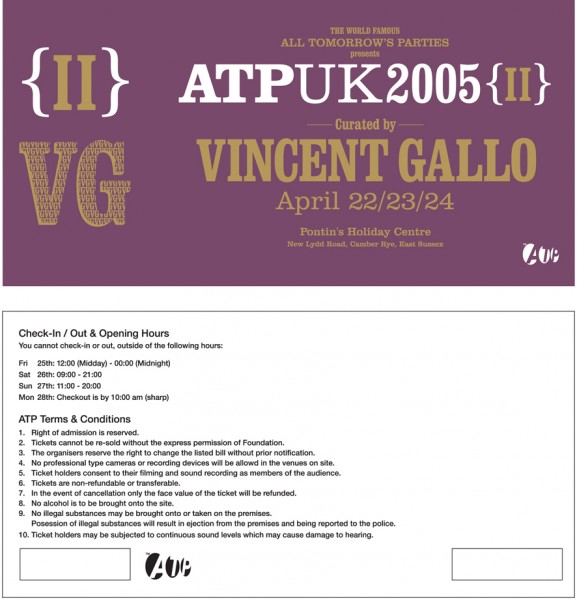