The Jon Spencer Blues Explosion – The Sound of The Future is Here Again! (May / June 2011) 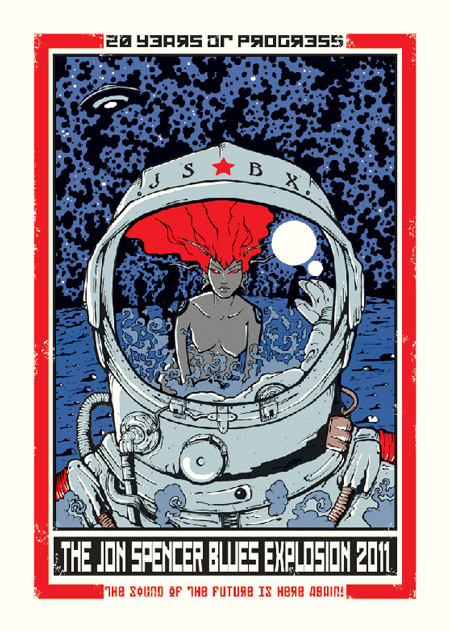 Poster for The Jon Spencer Blues Explosion tour dates during May and June 2011. Limited to 145 copies, 102 pieces available during the JSBX tour and the remainder was on sale after the tour via Malluesdelic.com.

This design is by Malleus who has posted an article on the process and thought behind the printing.

“When Jon Spencer sent me this sentence for the European tour poster we were working at, I thought it was amazing. The sound of the future is here again!

It came out natural to work on something involving space, aliens, russian propaganda, flying saucers (Jon asked for the one in the poster to recall their 1st single!).

We had a good amount of inspiration from the helmets of the famous cosmonaut Gagarin. Have You ever read his story? Damn, he was the first man to fly around Earth and then he died on a plane crash.”