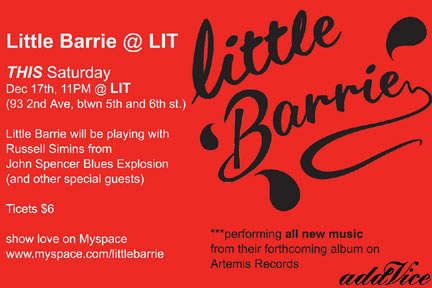 The show took place in December 2005 and the poster refers to their “forthcoming album on Artemis Records”. The label closed in April 2006 with the album finally being released via Hostess (Japan) in October 2006 and on Genuine Records (UK) in January 2007.

This event was also mentioned in the Little Barrie biography of the time:

“In a moment of inspiration, Barrie and Lewis headed off to New York to record with producer Dan “the Automator” Nakamura, an old acquaintance of the band’s manager. Hooking up with Dan Nakamura may have seemed a radical departure but given his understanding of a pertinent mix of musical genres, it proved a stimulating and fruitful relationship. Meanwhile their temporary drumming vacancy was filled by a friend of Dan’s, Blues Explosion sticksman Russell Simins, a confirmed Little Barrie fan.

Being something of a scenester Russell set about introducing the band to some of New York’s hippest bars and clubs, even suggesting he hook up with the band for a gig at NY hotspot LIT. Word must have got round on the grapevine because it was packed to the rafters, Lewis recalls, Dan even got up and played a bit of percussion. It must have been a good gig because I can’t remember too much about the end of the night.”

Russell appears on the Stand Your Ground album tracks Bailing Out, Pin That Badge*, Yeah We Know You, Cash In*, Just Wanna Play, Why Don’t You Do It* and Pay To Join.

*also released on the Pin That Badge EP