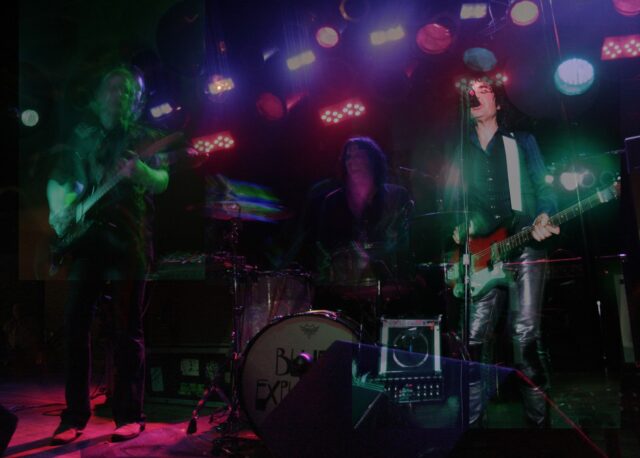 The Jon Spencer Blues Explosion show at The Bottom Lounge, Chicago, IL, US with Bloodshot Bill on 21 October 2012.

“Jon Spencer Blues Explosion was quite the experience, and one that anyone would enjoy, but to appreciate this music, you needed to be filthy, raw, and determined to rock. They brought it hard, and the crowd knew what to expect. Being the newbie at the Rock Bottom Lounge, I was quite impressed. Never missing a beat, always in motion, and having a creepy edge, I loved the way they introduced me to their soul. Not quite blues, not quite punk, they rode the cusp of two genres, and didn’t make the cut for either.

Jon Spencer in his tight metallic leather pants was the leader of the pack, and even scared me a bit, or rather, startled me. He jumped into the audience using my shoulder as his crutch, and almost hit me in the face with his guitar that was strapped to his side. The crowd loved it, while I was stunned at almost getting knocked out. I would say it was a remarkable experience, and one that has never happened to me in my concert going days. The band loved to interact with the audience, and they enthusiastically replied.

The trio of musicians played until they could play no more. The venue couldn’t have been more perfect for their edgy style. The stage was darker than most shows, making the figures on stage dark ghosts. Their facial expressions could only be seen through dim lighting, but the atmosphere was amazing. I most enjoyed the enthusiasm and emotion in the way they played. They gave it their all, and when they came out for their encore, they gave us some more, even harder than before. They will be one band I see again, if not for the music, definitely the experience. Rock on Jon Spencer Blues Explosion, you have exploded into my world!” – Chelsea Schneider (MotorCityBlog.Blogspot.com)

“The chemistry shared between Spencer, Bauer and Simins is irreplaceable, and this crazy thing they do onstage only works when the three share the stage” – Ryan Bray (consequenceofsound.net)