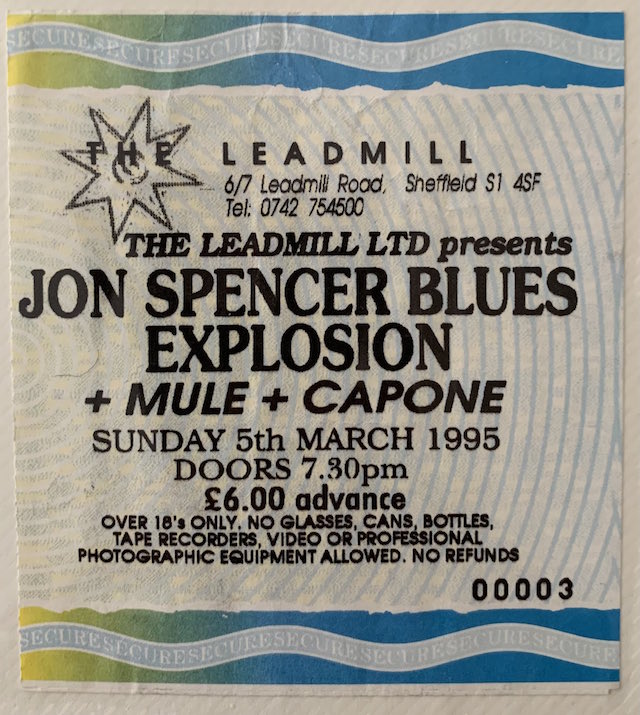 The Jon Spencer Blues Explosion show at The Leadmill, Sheffield, UK with Mule and Capone on 5 March 1995.

“On “Flavor” and “Greyhound”, the highlights of this evening, Simin’s drumming replicates perfectly the kind of arse-tube-lubing funkiness that the best hip hop deals in, the Blues Explosion blending it in not as some concession to modernity, but simply because it sounds so slamming. And the crowd get it instinctively, jumping as one with the “Go! Go! Go!”s like it’s Wu-Tang up there. What’s even better is Jon Spencer’s ability to get wet and slick down a Sunday night crowd without having to resort to the lazy guilt tactics so many performers do.” – Neil Kulkarni / NME

“The Jon Spencer Blues Explosion rock magnificently, and so their more attention-grabbing aspects – the Theremin (a weird electronic instrument used in ’50s sci-fi movie soundtracks), the irony and the Trashmen vocals – are part of a pretty visionary package when they’re whopping it out. A true validation of their elevated status.” – Meany

Tour Poster (below): Measures 40″ x 60″ and uses the original Crypt release of Orange colour scheme rather than the more common silver sleeve. 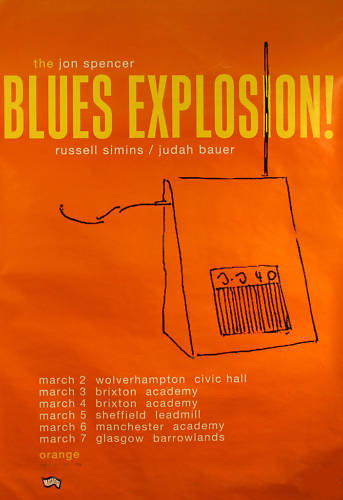