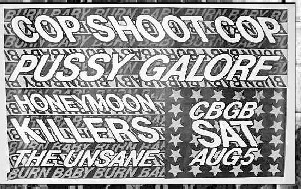 Part of this show was broadcast on The John Peel radio show on 25 July 1990.

The recordings from this show were remixed in 1997 and released as Live: In The Red on vinyl and CD.

Poster from the alexinnyc blog.