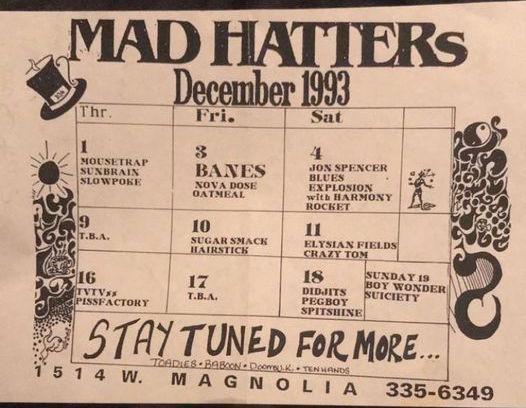 The Jon Spencer Blues Explosion show at Mad Hatter’s, 1514 W Magnolia, Fort Worth, TX, US with Harmony Rocket on 4 December 1993.

“Mad Hatters was a tiny little coffee/cafe that had shows. You couldn’t fit more than 100 people in there. The stage was 15 ft long and 10 ft deep and about a foot high. It was owned by the late Kelly Parker.

I’ve seen thousands of bands (not an exaggeration) and to this day that JSBX show was the greatest rock ‘n’ roll performance I’ve ever seen. I was right up front leaning on the monitor in front of Jon. I had never witnessed anything like that before. I’ve seen stuff come close, but no cigars. Life changing moment.

The year before Jon was real sedate, only saying “Thank You.” between songs. In the liner notes of Year One, Judah talks about how it was halfway through the JL tour that one night out of the blue, Jon goes into this “Jame Brown-Showtime at the Apollo” hype mode, yelling “Blues Explosion!” non-stop. So the night at MH, you may recall there was a long intermission after the first band and the word moving around the room was that JSBX were absent.

When they finally came in they were laughing and appeared to be loaded. Rumors were they had gone to some restaurant or drinking establishment and got primed. So they’re setting up their equipment, and Russell and Judah are still laughing and cutting each other up. Jon plugs in his amp, theremin and guitar, and then grabs the mic and starts screaming “Blues Explosion! Blues Explosion!” It was a total shock to see him so animated, and he was like that all night. They played many songs from Orange, which they didn’t start recording until the end of that tour. I clearly remember “Bellbottoms”, “Sweat”, “Orange”, “Blues X Man”, and my favorite “Brenda” that night. Plus all the Extra Width songs. It was just the most phenomenal thing and completely change my sensibilities. Within two years I just abandoned all things popular and “alternative” and fell into a bottomless garage rock pit.” – Jeffrey Martin

“Named after the brand of one of Don Feagin’s guitars. We changed our name after that show, which is weird. I think Don heard there was a Harmony Rocket band in existence, or maybe didnt like the name. That was also our first show as that band at a venue. Had played a houseshow a month before.”